How to Teach Children to Treat Others As Image Bearers of God?

In this episode, Elizabeth Urbanowicz talks about how to teach children to see others as God's image bearers. How do we help them understand the truth of this statement and its implications? Listen as Elizabeth shares practical biblical wisdom and insight to help change how our children see others.

Note: The following is an auto-transcript of the podcast recording.

Hello friends, and welcome to the Foundation Worldview Podcast, where we seek to equip you to get the kids in your care to carefully evaluate every idea they encounter and understand the truth of the Christian worldview.

I'm your host, Elizabeth Urbanowicz, and I'm thrilled that you've joined me for another episode of the Foundation Worldview Podcast. Today our question says, "How do you teach children to treat others as image bearers of God?"

And I love this question because it's so foundational in how we live our lives, and how we view those around us. And as Christians, we know that each and every human is an image bearer of the Holy God. So teaching our children to treat others as image bearers is key.

And now one mistake that I think we frequently make in the Christian community is we try to change behavior before first trying to change belief. And so if we want our children to have the right behavior, we first need to make sure that we establish the right belief. And now this is a pattern that we find throughout scripture.

When you read most of Paul's letters, the instructions for how to live usually actually come in the second half of the letter. The first half of most Paul's letters is all theology, what is the truth about who Jesus is and what He's done for us. And then once we have an understanding of that, how do we live in response to that?

So when we think about the truth, that we are all image barriers of the holy God, we need to make sure that our children, one, understand that truth, and then really understand the implications of that truth.

So the first thing that I would recommend doing, it might seem very simple and straightforward, is just read through Genesis 1:26 through 28 with your kids. If you're working with older kids, like ages eight on up, just read those verses and then say, "Okay, I want us to talk about how is it that God has created humans?"

So if you're working with older kids or teens, you can actually show them that parallel structure within the lines of poetry, showing them that look at male and female is directly linked to being created in God's image.

With little ones, if you're working with little ones who need their bodies involved, like kids seven on younger, what you can do is you can read those verses and say, "Okay, every time these verses say something about how humans were created, I want you to jump up and spread out your arms and then we're going to stop and we're going to talk about how were humans created."

And so you can have that conversation. Then every time when it says, "Image of God," they're going to jump up. And then male and female, they'll jump up. So that they just get their bodies involved, thinking about how did God create humans. Okay, so that's just laying the foundational biblical truth.

Another game that I like to go through with little ones is just showing them pictures of all different types of people. In fact, in our Early Childhood Worldview curriculum that we have out at Foundation Worldview. This is an activity we have the kids do in unit three, where we'll show them pictures of people from different countries, people with different skin colors, people of different ages.

With older kids, we can have these conversations about what attributes does God share with us. That book, Attributes of God for Kids, it is written for younger children. But you can even use it on up to fifth grade because kids can read it on their own and just talk about, okay, what are some of those attributes that God shares with us that then we can reflect to others as his image bearers?

And then actually get into practical discussions for how does this truth impact the way that we live our lives? We can talk with our kids about how do we treat others in different situations? We can model this for them. For example, when someone cuts you off in the middle of traffic or does something dumb on the road, rather than becoming frustrated or shouting out in anger, we can say, "Oh my goodness, I am feeling really angry right now. But you know what? That person that just cut me off, that's an image bearer."

So we can model that for our kids. We can talk about how do you treat someone on the playground who's unkind to you? Or how do you treat the new kid at school or at church? Or how do we treat our next door neighbor? What are the implications of this?

So to have that conversation when somebody cuts in front of you on the slide. You might need to tell an adult because that child shouldn't be doing that. But you can still treat them kindly because they're an image bearer.

When you're talking with older children, how do we talk to others and how do we talk about others? When they're not there, how do we make sure that our conversation is treating them like an image bearer?

If you're talking to teens when they're starting to get interested in the opposite sex, talk about, okay, how do we treat those who we're attracted to? If you go out on a date with someone, how do you treat them because they're an image bearer?

So once we've laid that foundation and then we've talked about, okay, what are the implications? Then we need to practice actually as a family practically living this out. And this can be done in really simple ways. Having people over for dinner regularly, just showing our kids, modeling for our kids, training our kids that other people are important.

We can do things like serving our neighbors, going and mowing their lawn. Just last week, I was away for almost the entire week doing training at a school, and when I came back, my yard was mowed. And that was the hugest blessing to me, that someone from my missional community group at church knew that I was away, came over, mowed the lawn weed-whacked, edged. It was such a blessing.

So this is something we can do for others. Go over and mow a neighbor's lawn. Visiting an elderly person at church, whether they're a shut-in or whether they're in the nursing home. I know this was something my mom modeled for me and my siblings so well when we were growing up that once a week there was an elderly man who we didn't really even know very well ahead of time.

My mom knew him better because she had been going to the church for longer than we had. But he was in the nursing home and once a week after school, my mom would pack us up, bring a snack with us, and we would go and we would visit this man in the nursing home and we would just get to know him and just spend time with him because he didn't have anyone else visiting him. We can make a meal for people down the block. We can make a meal for a family at church. Just look for who is in need. How could we treat them as an image bearer?

We also need to share the Gospel with others. We need to share the good news of Jesus with those around us who do not know Him. So this would be my recommendation, for equipping our kids to understand how to treat others as image bearers.

First, we need to lay that foundation biblically, where we're reading those passages with our children so that they understand the theology behind this. Then we need to discuss the practical implications. What does it mean that every human is an image bearer of God? And how should we then treat them? And then actually modeling how we treat others, and we need to be very, very intentional.

I was just talking about this earlier this morning with a friend. We were talking about how a lot of times young moms, they'll just kind of hide themselves away for six months. And I know giving birth can be a traumatic experience. It takes a long time to heal from that. But sometimes people hide themselves away for longer than necessary, just feeling like they need to do a ton of self-care.

Where what we were talking about is how impressed we are with the young moms who actually get out and are actually actively seeking to serve others. And I was telling this friend how impressed I was with my sister that very shortly after she had her first child, she was out again serving the body of Christ, being a blessing to others. And when I asked her about that, I was like, "How are you doing this already and why are you doing this?" And she's like, "Well, that's just what mom modeled for us. She just strapped us in the front pack and she took us to serve others."

And so these things that you're doing as you were treating others as image barriers of the Holy God, your children are going to see that and these are going to be patterns that they're going to develop and Lord willing hold onto throughout the rest of their lives.

Well, that's a wrap for today. But as always, as we leave this time together, my prayer is that God would continue to bless you as you intentionally disciple the children He's placed in your care. I'll see you next time. 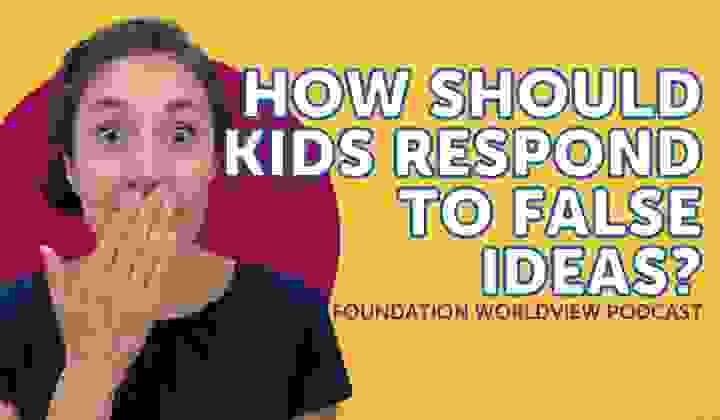 How Should Kids Respond to False Ideas 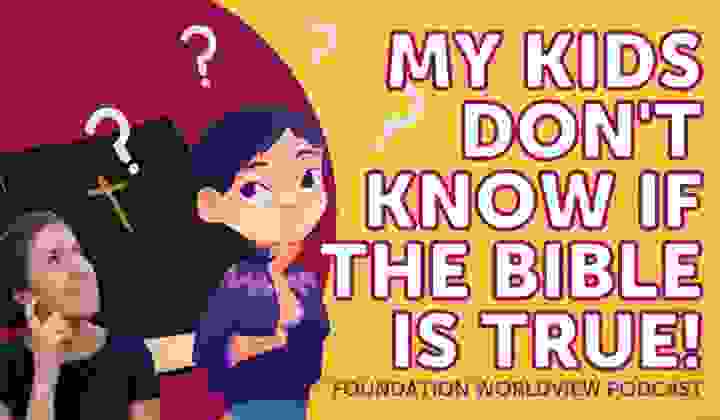 My kids don't know if the Bible is true!

In this podcast episode, Elizabeth Urbanowicz helps parents guide their kids who don't believe in the Bible. If you're a parent in this situation, you may be wondering where these ideas are coming from and whether this skepticism is healthy, intellectual, or rebellious. How should the kids in your care feel after your conversation with them? What is a reasonable amount of evidence that parents need to provide their children that the Bible is true? By the end of the episode, you'll be equipped with the tools you need to help your kids articulate their questions, and understand your point of view, without sacrificing the relationship. 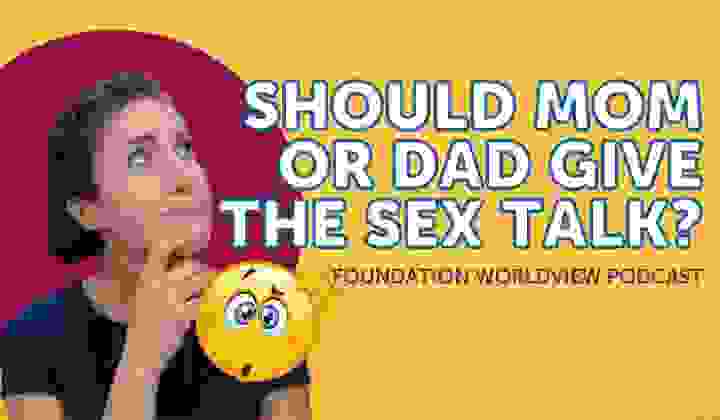 Should Mom or Dad Give the Sex Talk?

It's no secret that sexuality is a tough topic for parents to broach with their kids. After all, it's not something that most of us feel comfortable talking about. How do we talk to kids about sex and sexuality, and when's the right time to do so? In this episode, Elizabeth Urbanowicz answers the question, "Do you think it is more valuable for a dad to have talks about sexuality with a son or is either parent just as valuable?"